Welcome to All That's Marco


Keep in Touch: the little store that could

Long-serving store has gifts, cards, curios, and is a perfect Post Office satellite

Every business starts out as an idea, and in the case of Keep in Touch at the Shops of Marco, it was an idea that fell perfectly into place.

Around 2007, islander Mike Held had decided to move on from his computer software business, and partner-to-be Jiri Mikulinec found himself at a loose end after the Hallmark card store where he worked closed down.

"We had met at Hallmark," says Mike, "and we put our heads together with the idea of creating a company." 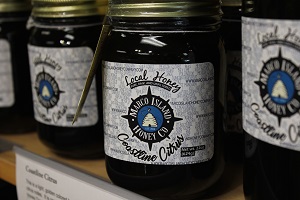 They decided on a gift shop, which they felt would be a niche addition to the businesses at the Shops of Marco.

At first they stocked simple household gifts and curios, but later would expand to cards, apparel, mugs, almanacs, locally produced honey, candles and figurines, just to name some.

A big move, however, was the traffic-driving notion of applying for the business to house a satellite unit of the United States Postal Service.

"It took us about a year," says Held, "and since then we have been able to perform all the services offered by the regular post office on Elkcam Circle, except for money orders."

Mikulinec, incidentally, was familiar with satellite post office procedure because there had been one in place at the original Hallmark store.

The satellite office was an immediate hit for two reasons, Held says. Naturally, people liked the option of fewer lines, but as importantly, they liked the personal service ethic developed by Held and Mikulinec.

These services included packing and boxing items for clients if required, as well as completing labels for older folk who found writing them tricky.

The duo also became notaries, adding an extra layer of service to the business.

"I know it sounds like a cliché," Held says, "but we made a point of treating everyone like family." 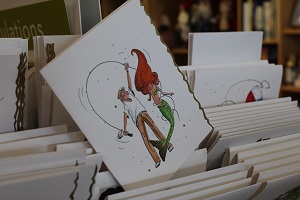 One of the store's main attractions down the years has been the sale of islander Betty Kimble's iconic hand-drawn cards. Working well into her 90s, Kimble passed on about a year ago, but left a creative legacy that Held will perpetuate.

"We have all the masters, and Jiri adds a special touch because he has a flair for calligraphy and can add names and messages to the cards," Held says.

Other services include sending faxes for customers and printing out flight boarding passes.

Keep in Touch is one of those fun places to explore because of its eclectic variety of gifts and useful household items.

Add in the staff's cheerful demeanor and just visiting Keep in Touch turns into a really pleasant experience all by itself.

Tropical, laid-back island is the gem of the Ten Thousand Islands 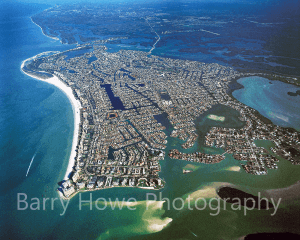 So, you drove over the bridge and marveled at the place. You are not alone. Almost everybody who lives on this 20 square mile island felt the same when they made their first visit.

Water everywhere, the city skyline in the distance, not one, but two welcoming Old Glories, and roads that lead to perhaps Marco's most famous attributes, its beaches.

The island, which was home to indigenous Calusa Indians around 500 A.D., is nevertheless relatively young in terms of development, which only kicked into gear in the 1960s.

The developers, the Deltona Corporation, basically transformed what was the largest of the area's Ten Thousand Islands into a residential (and later, business and tourism) hub by crisscrossing the land with about 100 miles of man-made canals.
Read More...